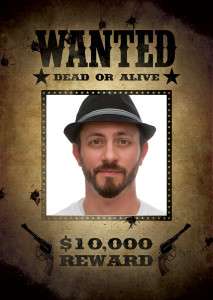 Despite claiming not to be an international fugitive in my first post on this blog, it turns out I am!

Several months before coming to Granada was even a topic of conversation for us, I got pulled over in Kyle, Texas for not coming to a complete stop at a red light. Of course, I HAD come to a complete stop, but this particular cop – the scourge of Kyle, Texas as reported by more than a few people we knew there – was notorious for handing out tickets for next to, or literally, nothing.

I was not going to pay a fine for something I did not do, so I went to the courthouse to contest it. Apparently lots of people contest tickets in Kyle, Texas because they said it could be up to a year before I get a court date set. Naturally, I did what anyone would do in this situation and completely forgot about the whole thing.

My court date came up on October 15th. I don’t remember what I did that day instead of going to court, but I do know that whatever it was happened in Granada, Nicaragua some 8,000 miles away from Kyle, Texas. Now I have a warrant out for failure to appear!

I expect any day now that members of the Kyle, Texas International Task Force will come barging into our home, possibly even repelling from helicopters, to cart me back to Kyle. I guess I should just pay the $600 fine to clear my record. Maybe I’ll mail them 15,000 Cordobas instead.