We booked a long weekend in San Jose, Costa Rica to renew our tourist visas. For those not in the loop, you have to leave the country for 72-ish hours every 90 days to renew your tourist visa if you are not a resident. We’re doing that in Costa Rica.

We got into the airport after a short 35 minute from Managaua around 8:30 pm. The flight on Copa Airlines was quite nice for being so short. They even gave us all little beef fajita and peppers sandwiches and cookies!

On arrival we exchanged some USD for Costa Rica Colon. This was a little baffling. We’re just really getting our heads wrapped around the USD to Nica Cordoba exchange rate. Just when we’re finally able to know without using a calculator what something like C$2,000 means in USD, now we have figure out something new! One good part to this is that Costa Rican money has pictures of animals on it. That’s pretty cool.

We grabbed a cab to Hotel El Maragato but couldn’t get there. The hotel is located on the main strip in town, Central Avenue, which doesn’t allow vehicles, so our driver dropped us off…somewhere…motioned vaguely into the bustling Costa Rican night and said something that roughly meant “walk that way”. So we did.

We got lost. Naturally. But not for long. We finally found our hotel, checked in, realized we were starving, and immediately went foraging for food.

We found a very American-ized bar / restaurant called Piso 3. The service was very nice and friendly, but the food was horrible. After waiting too long for food and scarfing it down with disappointed looks on our faces, we paid the bill: $33,300 Costa Rican Colon. That’s almost $70 USD. We’ve been warned that the prices here are much higher than Nicaragua, almost on par with US prices. This certainly seems to be the case!

I didn’t have a chance to take any interesting pictures on Day 1. Only this one of our towels rolled up into the shape of some sort of bird of prey: 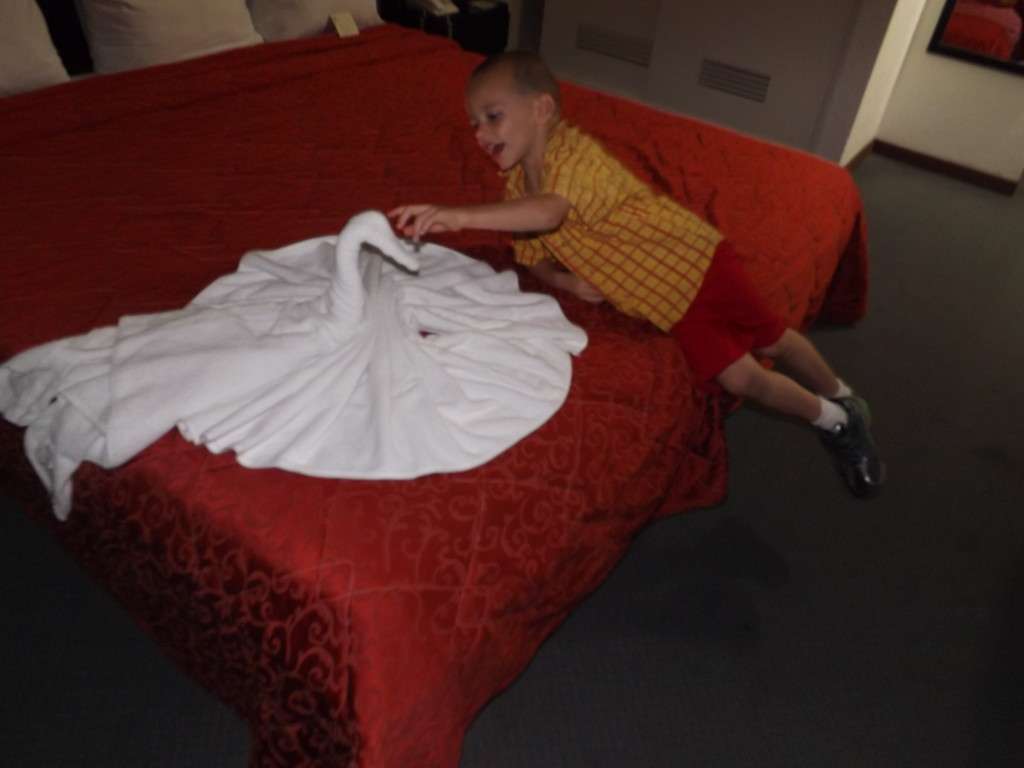